Calvary Baptist Church is celebrating Women’s Day for the first time since 2019.  Women’s Day is an acknowledgment of another year of praise and worship that God has allowed us to enter. Women’s Day 2022, under the leadership of Deacon Jeanette Lyde, is comprised on several leadership teams working together to bring forth amazing activities and programs to share with Calvary’s congregants and the community-at-large.  The Women’s Day 2022 activities include a An Amazing Encounter Service on Wednesday, May 18, 2022 at 7:00 p.m., The Amazing Crowns We Wear Prayer Breakfast on Saturday, May 21, 2022 at 9:00 a.m. and culminates in a worship service on Sunday, May 22, 2022 at 9:45 a.m. featuring Rev. Dr. Gwendolyn Boyd, former International President of Delta Sigma Theta Sorority, Inc.

Talena Lachelle Queen focuses on creating an atmosphere of love in her English writing class at Eastside High School Academy of Culinary Arts, Hospitality and Tourism in Paterson.

The teacher and poet says love looks like understanding, kindness, and support in the classroom, especially as her students returned to full-day, in-person instruction this academic year.

By establishing a welcoming environment, students feel comfortable “to confide in me and want to get higher grades because they know they are valuable,” said Queen, a Paterson native who attended a local performing arts high school.

“I got to see dancers have recitals, actors have plays, musicians have shows, and artists have exhibits,” Queen said. “The writers did not have that kind of public showcase of their talent like the other disciplines.”

So when in 2018 she was named the city’s first poet laureate by Mayor Andre Sayegh, she started the first annual Paterson Poetry Festival. The festival is intended to serve and support young emerging poets, she said.

Poetry vibrates throughout Paterson, the hometown of poet Allen Ginsberg and the setting of Williams Carlos Williams’ epic poem named after the city. The city was even at the center of the 2016 movie with its namesake, which followed the life of a fictional bus driver and poet named Paterson.

While the city is brimming with arts and culture , incidents of gun violence and homicides are also a reality. There was a record number of homicides in the city last year and the year before.

The educator didn’t have a straight path to teaching. She started out working in broadcast journalism until she took on her first teaching role in 1998 to run a grant-funded videography class at Passaic County Community College. After that, she ran a preschool and daycare in Seattle, earned her teaching certificate, returned to her hometown, and began teaching at Paterson Public Schools in 2016.

Queen shared with Chalkbeat how she helps her students heal from the last two years, why she loves teaching “science of writing,” and the advice she follows to this day.

This interview has been lightly edited for length and clarity.

Was there a moment when you decided to become a teacher?

I decided I wanted to be a teacher in kindergarten, but I forgot about that dream while pursuing a career as a writer and journalist. I got back to my dream in time.

How do you bring your poetry background into your classroom?

I bring my poetry background into the whole district. Our superintendent has been supportive in a variety of ways. I host a poetry contest open to grades 3-12. The district is the primary contest source, though it’s open to all students. I host workshops for free. I visit campsites and afterschool programs. It is true that my favorite way is right in my own classroom. I tell the scholars to “make clay.” When they make clay, I can help them to mold their creations. A great thing happens: a scholar will “trust their pen and just write,” they’ll use a style that they think they’ve invented because they haven’t had intentional exposure to poetry, then I show them published poems in the style of their natural inclinations. I tell them the name of what they’ve made. It is incredibly empowering.

The Calvary Baptist Church Singles Ministry is hosting an Adult Game Night.  The event is scheduled for Friday, April 22, 2022.  The event will be held from 7:00 p.m. until 10:00 p.m. at Suite6TwentySix Art Studio, 24-02 Broadway, Fair Lawn, NJ 07410.  The cost for the event is $20.00 person.  If you are interested in attending, the admission fee can be paid via Cashapp: $CBCPaterson with Memo: Game Night.  All who attend will have an enjoyable evening filled with food, prizes and fun.

On Saturday, January 29, 2022, Pastor Randall M. Lassiter addressed the church and delivered his State of the Church Address.  During his address, Pastor Lassiter discussed his accomplishments in the last year, as well as virtual opportunities that the Historic Calvary Baptist Church will take advantage of in 2022.  Lastly, Pastor Lassiter presented his goals for Calvary Baptist Church, which continue to be 1) Campus Facilities; 2) Forward Thinking Programs (Ministry); and 3) Financial Strength and Stability.  While these goals remain in place from 2021, Pastor Lassiter demonstrated there were activities and objectives completed, but there is more to accomplish. to view the 2022 Annual Report, click here: https://anyflip.com/zuko/rxao/.

Calvary Baptist Church and its Outreach Ministry hosted its Inaugural Back-to-School Block Party.  On September 11, 2021, Calvary Baptist Church and its sponsors provided backpacks and back-to-school supplies to students within the 4th ward and surrounding neighborhoods.  According to Pastor Randall Lassiter, Calvary’s mission is to provide for the community.  Church is not just inside of the building, it is outside of the building as well.”

In the wake of Hurricane Ida, the back-to-school block party was used as a venue to disseminate clothing, water filtration systems, and non-perishable food items to those in need.  Additionally, Calvary Baptist Church, in partnership with the New Jersey Department of Health, provided COVID 19 vaccinations.  16 individuals were able to receive their vaccinations on-site.

Governor Phil Murphy commemorated the first official Juneteenth holiday at Calvary Baptist Church.  On June 18, 2021, Governor Phil Murphy, Assemblyman Benjie Wimberly, Assemblywoman Shavonda Sumter, Assemblywoman Verlina Reynolds-Jackson, Assemblywoman Angela McKnight, Mayor Andre Sayegh, and other state, county and local elected officials and community members descended upon Calvary Baptist Church to celebrate Juneteenth and sign the Fair Chance in Housing Act (S250/A1919), barring landlords from asking potential tenants about their criminal history on housing applications.  According to Assemblyman Benjie Wimberly, a member of Calvary Baptist Church, “Under this law, landlords are implored to take an honest look at the application process and not paint every individual with a conviction with the same broad stroke.  We’re fighting generational poverty, homelessness and hopelessness through social justice reform measures, such as this one’.

Housing instability is one of the key determinants of recidivism.  This legislation aims to eliminate a barrier to those individuals with criminal records from the cycle of housing instability and homelessness.  This legislation, sponsored by Senator Troy Singleton, Assemblyman Benjie Wimberly, Assemblywoman Verlina Reynolds-Jackson and Assemblywoman Angela McKnight is historic.  It is the first national ban-the-box in housing state-wide legislation.  New Jersey has made history with this piece of legislation and that history was signed into law at the Historic Calvary Baptist Church.

Doing Our Part- Serving the Community

Our city, the City of Paterson, has been hit hard by the COVID 19 pandemic.  So, it makes sense for Calvary Baptist Church to step up to the plate when asked and serve as a community vaccination site.  The Community Vaccination event, held on March 1, March 29, and April 5 allowed Calvary to partner with the State of New Jersey Department of Health and FEMA while vaccinating 2,500 people.

“It was a major undertaking, but an awesome way to help get our community back,” says church employee Lanisha Makle-Ridley, who assisting in coordinating the event. “Many people came to Calvary to get vaccinated who were unable to secure appointments elsewhere.”

It may have been a chilly February Saturday, but the volunteers of the Calvary Baptist Church Community Outreach Ministry did their best to make everyone feel warm. The event was Coats, Cookies & Cocoa, a winter clothing give-away for neighbors in need that also featured popular treats for the kids. In all, volunteers gave away 300 children’s coats, which were provided by Operation Warm, a national nonprofit. 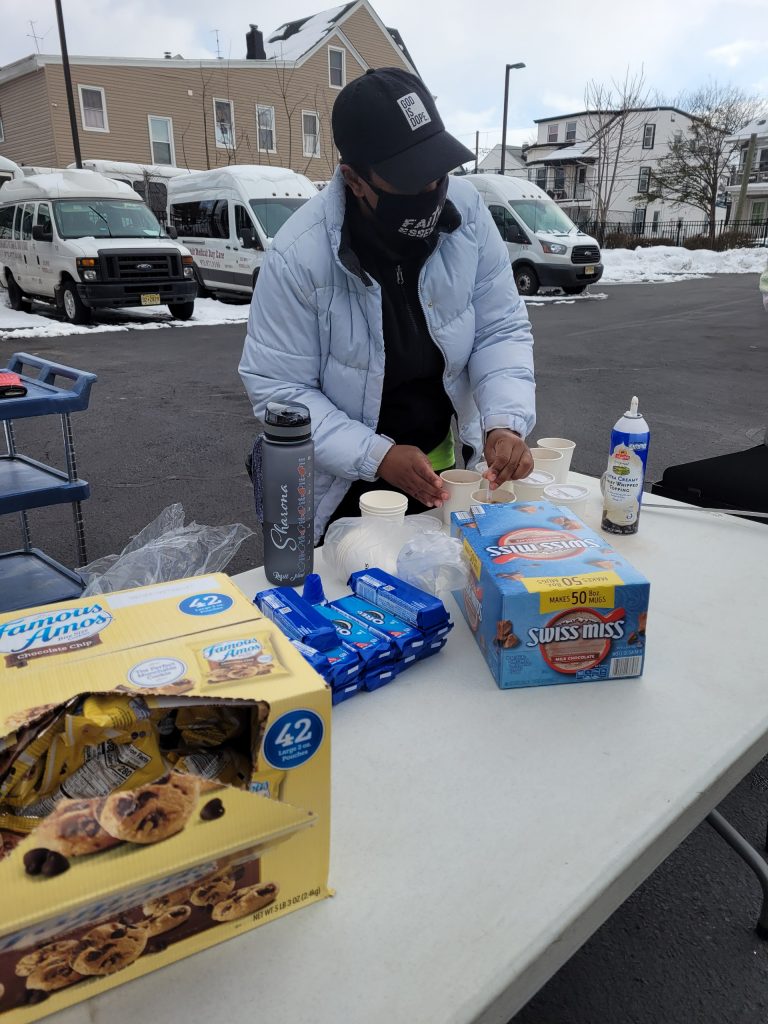